We spoke with Income Research + Management to discuss opportunities for insurers in crossover credit and how COVID is impacting the market, as well as fallen angels.

SAA: How attractive is crossover credit from a risk return point of view?

IR+M: We believe that there are opportunities within crossover credit, a rapidly growing segment of BBB-rated securities that is on the cusp of “crossing over” into BB-rated. Crossover can also be thought of in terms of a credit upgrade – a BB-rated security migrating into the investment grade universe. After the financial crisis, investment-grade issuers steadily increased their gross leverage, averaging 2.5x over the three-year period ending December 2019. In response to the coronavirus pandemic, BBB-rated issuers increased their gross leverage to 2.9x – a level not seen since June 2009. Within the BBB segment, those rated lower-BBB had a leverage of just over 3.0x. Despite the rise in leverage, issuers have shown that they can meet their debt payments. Interest coverage ratios have continued to improve, and are at a higher level during the coronavirus pandemic than they were during the Great Financial Crisis – 9.8x and 8.4x, respectively. 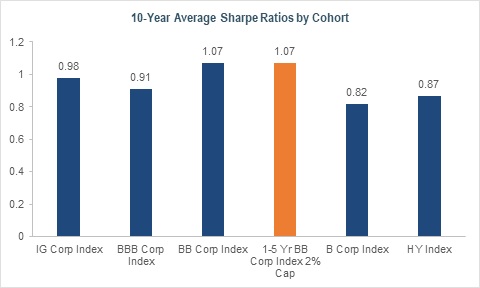 During the financial crisis, crossover credit spreads widened as much as 1,26bps, while BBB corporates reached 770 bps. As the economy recovered, these spreads significantly tightened to 349 bps and 196 bps, respectively, by December 2010. Crossover credit spreads through the end of June 2020 were 408 bps. Though spreads have tightened since their March peaks, crossover spreads were still higher than their 5-year average of 266 bps through June 2020. We believe that there is an opportunity in those BBB-rated securities that the market views as downgrade candidates. These securities are often large companies with numerous levers to pull to preserve their balance sheets, and priced as high-yield ahead of rating agency action. This segment of the market, along with fallen angels, are potentially a sweet spot for managers, since forced sellers can create buying opportunities.

SAA: How is COVID impacting the market, and how will fallen angels affect the composition of the universe? What sectors have been most affected, and can investors take advantage of opportunities without making a big sector bet?

IR+M: The novel coronavirus has had a significant impact on the US economy, as evidenced by the 5% decline in Q1 GDP – the worst quarterly contraction since 2008. For Q2, the estimates for GDP are decidedly worse at -35%, and quarterly earnings are expected to similarly decline before gradually improving. The market has not been immune to the impact of the virus, with investment-grade corporate spreads widening as much as 373 bps in March. Following the Federal Reserve’s (the Fed) lowering of interest rates to near zero, and broadening their lending programs to include corporate bonds, investment-grade corporate spreads tightened over 220 bps to 150 bps at the end of June. As liquidity has slowly returned to the market, so, too, has new issue supply, which reached $1.2 trillion as of June 30, 2020.

To date, approximately 10% of investment-grade issuers have been downgraded at least one notch, with an estimated one-third of those downgrades attributed to fallen angels (approximately $150 billion year-to-date as of June). If the recovery is protracted, that number could rise to $250 to $300 billion by year end. Of the $700 billion in securities rated BBB-, an estimated one-third are currently on credit watch.

Lockdowns and social distancing have adversely affected several sectors, such as travel and leisure and energy. Airline travel has been hit particularly hard, with TSA throughputs down nearly 80%. Recovery in the airline industry will depend on consumers’ comfort with flying, as well as the prospects of a vaccine. The energy sector continues to face headwinds due to supply and demand shocks. Approximately 55% of demand is driven by both air and ground transportation. Back in April, when non-essential travel abruptly ceased, contracts dipped below $0 for the first time. While oil is now hovering near $40/barrel, the virus’ resurgence in some states may cause a rollback in re-openings, and as a result, a fall in demand.

REITs, particularly those with direct exposure to retail, hotels, restaurants, theaters, and offices, have also been negatively impacted. With reduced consumer leisure spending and businesses working remotely, rent deferrals and abatements may pressure this sector. The healthcare sector has also been affected, with hospitals losing revenue due to the postponement of elective procedures. These procedures can comprise nearly half of hospital revenues. While the CARES Act provided hospitals with $100 billion in aid, we believe that they will remain at risk.

At IR+M, we remain focused on credit fundamentals, and are surgical in our bottom-up approach. We favor those industries and companies that have shown resilience during these challenging conditions, and represent strong relative value. We believe that, for the discerning investor, there are opportunities within fallen angels, as well as within select new issue corporates and securitized.

Source: Strategic Asset Alliance, Income Research + Management, Bloomberg, Bloomberg Barclays, Morgan Stanley as of 6/30/2020. The information contained herein has been obtained from sources believed to be reliable, but the accuracy of information cannot be guaranteed.

The views contained in this report are those of IR+M and are based on information obtained by IR+M from sources that are believed to be reliable. This report is for informational purposes only and is not intended to provide specific advice, recommendations for, or projected returns of any particular IR+M product. No part of this material may be reproduced in any form, or referred to in any other publication, without express written permission from Income Research & Management. BLOOMBERG® is a trademark and service mark of Bloomberg Finance L.P. and its affiliates (collectively “Bloomberg”). BARCLAYS® is a trademark and service mark of Barclays Bank Plc (collectively with its affiliates, “Barclays”), used under license. Bloomberg or Bloomberg’s licensors, including Barclays, own all proprietary rights in the Bloomberg Barclays Indices. Neither Bloomberg nor Barclays approves or endorses this material, or guarantees the accuracy or completeness of any information herein, or makes any warranty, express or implied, as to the results to be obtained therefrom and, to the maximum extent allowed by law, neither shall have any liability or responsibility for injury or damages arising in connection therewith.